Return to a Midgar like you’ve never seen before, in this faithfully remastered graphics mod for Final Fantasy VII (PC). The Remako HD Graphics Mod features improved graphics with 4x the resolution of the original. This was accomplished by using state-of-the-art neural networks to upscale the game’s graphics.

The mod improves the quality of among other things the pre-rendered backgrounds, battle, world textures, as well as the game’s full-motion videos (FMVs). Remako is also compatible with many other mods, such as The Reunion (R03C) or 3D model mods, for the ultimate Final Fantasy 7 experience.

Remako Mod is compatible with all PC versions of FF7: the CD original, the Square Enix Store version and the Steam release.

A big improvement over the original beta release, the 1.0 update is chockful of great graphical improvements to Final Fantasy VII. 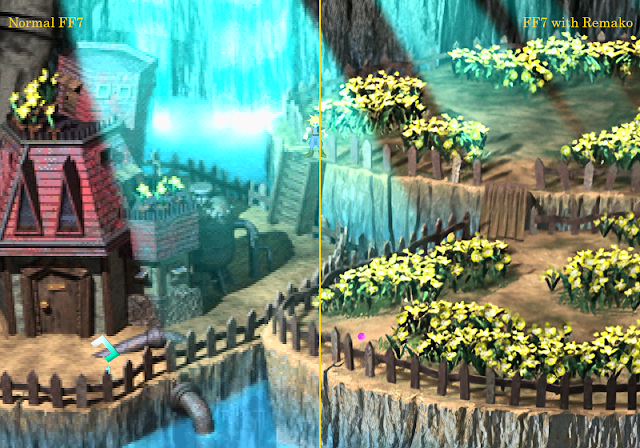 Remako completely revamps the pre-rendered backgrounds of Final Fantasy VII. All of the
backgrounds now have 4 times the resolution of the original.

The pre-rendered backgrounds were already in the beta for Remako. In 1.0, these backgrounds have been further improved, bugs fixed and graphical issues corrected.

Some effects on some screens aren't filtered to avoid in-game animation bugs. Examples include the glow in Mt. Nibel and the waterfall behind Aeris' house. Still, the bump in resolution outweighs the loss of some of the game's background animations, don't you think? 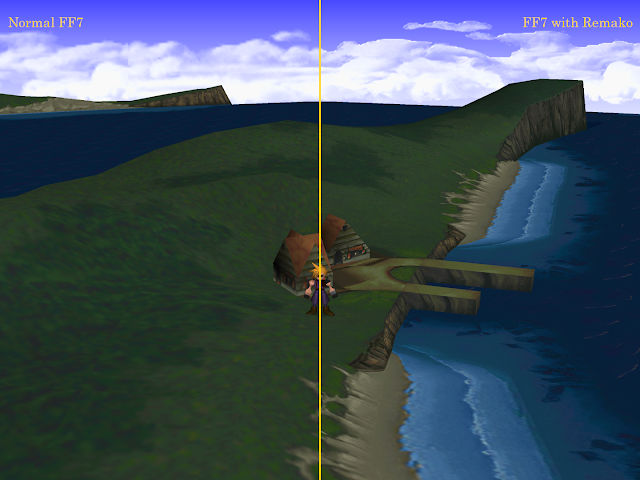 Traveling around Gaia has never looked better! The world textures have also been upscaled 4 times, giving the overworld a much sharper and more detailed look. 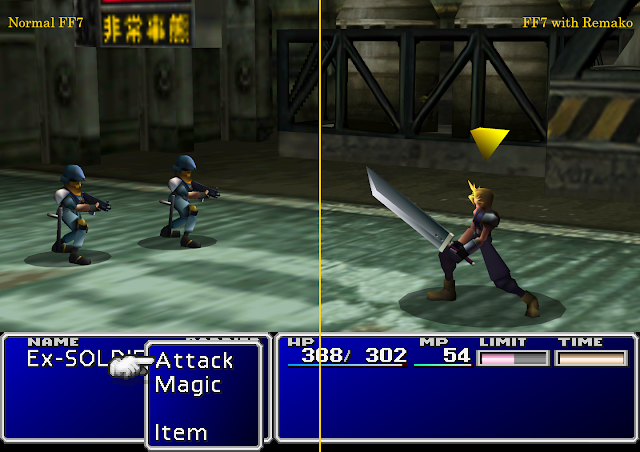 While the background textures in the battles weren’t as jarringly low-res as the field backgrounds, improvements could still be made. All of the game's battle backgrounds have gotten a graphical upgrade, which is great since you spend a lot of time in this game battling it out!

Where possible the FMVs now use the PSX original's audio tracks. These are much higher quality than the PC version's FMVs had, sounding much fuller and less tinny.

In the beta release, I had not yet upscaled the so-called char textures. These are 2D images and 3D models that move independently of the field backgrounds. Think the gondola in the Golden Saucer or the movable train in the trainyard. In version 1.0, all char textures have been upscaled. 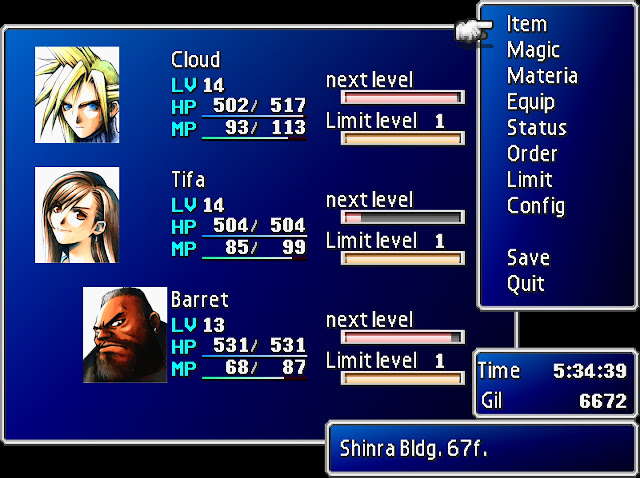 The avatars that you see in the game's menus have also been given the AI upscale treatment, looking very smooth.

Finally, Remako also sees some improvements to the minigames and their textures. Racing down the highway with your G-Bike or defending Fort Condor from Shinra has never looked better!

The mod has been tested for compatibility with other mods that you can load through the 7th Heaven Mod Manager, including The Reunion (R03C) as well as the many great mods that improve the game's 3D models. 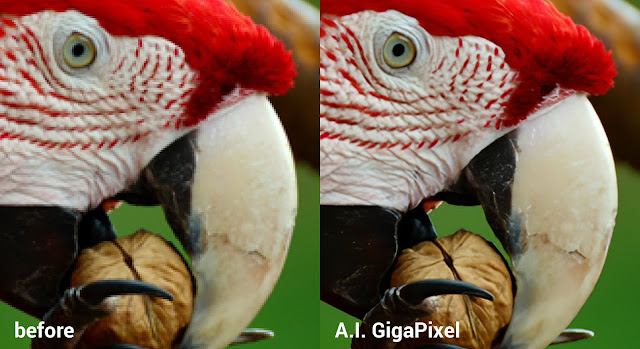 The magic behind Remako HD Graphics Mod was made possible with the AI upscaling tool AI Gigapixel. Using state of the art AI neural networks, this upscaling program tries to emulate the detail the original renders would have had. This helps the new visuals to come as close to a higher resolution re-rendering of the original as possible with current technology.

Head over to the screenshots page for some more screenshots to show off the mod. Or if you want, there's a 12-minute gameplay video of 1.0 in the videos section.

Getting Final Fantasy 7 ready for mods requires several steps. That's why I made this helpful install guide. I recommend everyone use it, even those who played the beta (as there have been some changes).

What do you think?

Once you've got a chance to play Final Fantasy 7 with the Remako HD Graphics Mod, I'd be interested in hearing what you think. Please leave a comment below, with your thoughts about the mod.

Itwaslagiswear said…
Does anyone know if this works with New Threat?

e2zippo said…
This is amazing! Just bought the steam version and installed, although I don't like 7th Heaven, it's PITA and doesn't launch the game directly. Still worth it though! I'd love to use The Reunion Mod, how's the compability for RO5C? And it looks like R06 is due out very soon!
May 24, 2019 at 10:06 AM

Korin Flakes said…
Download the Modding tools zip setup file. It's only 50mb and contains the yuv.frag as well.

naoqueroquevocevaembora said…
new threat is really good? like hardcore mod but withou all the difficult spikes every battle? i am waiting for final mix mod to be released for public

Adenauer said…
Thanks for this awesome mod.
How do I make my control work? When I open the game by steam my DS4 is recognized normally. But here it does not even work with DS4 tools open
May 25, 2019 at 2:48 AM

Carlo Murenu said…
Awesome work, Amazing. I am just sad that I have the steam version and seems from the guide that is going to work only if I move the folder, losing my saves and cloud :( hope will be another way
May 26, 2019 at 1:51 PM

Unknown said…
Ive installed the NEW modz & everything has FF7 has stopped working on my laptop. And why are comments being deleted?
May 26, 2019 at 8:56 PM

Unknown said…
What does it mean by 'removes steam achieves? I presume it means you won't be able to unlock them when playing the game? Or does it actually wipe them from steam and you have to get them again?
May 27, 2019 at 2:18 PM

fatenabu1 said…
So I am getting garbage on battle screens instead of character names. Also it seems the fonts/text in the menus are crunched up together..

Warrior of Light said…
Good job, but is there any way you can eliminate the annoying black bar at the bottom of the screen?
May 31, 2019 at 8:53 AM

TailsPrower said…
Awesome mod! However, I installed it alongside the Reunion mod following a guide, and the menu reverted back to the old menu (without the Quit button, and low res icons). Any way known to fix that?
May 31, 2019 at 4:05 PM

Unknown said…
Some of the character sprites in non cutscenes come out looking weird. Notably Hojo, biggs wedge and jesse and sephiroth all have black holes or 'lipstick' where there mouths are i know that isnt right? Did i do something wrong? everything else seems to of worked fine. Pic is problem. http://tinypic.com/r/fn69au/9

CaptRobau said…
The PC version (at least the Steam release) adds mouths to characters. These are not in the PSX original. This is not something this mod does.
June 21, 2019 at 4:35 PM

drakens51 said…
Does it work with the Xbox one digital download version?

Deano78 said…
in all honesty.. this is an amazing bunch of mods, clearly by very talented hackers, modders, scripters BUT not ONE of them can write an 'auto install program' (maybe using c# or some other language) that will do ALL the install process of the mods for you..? unbelievable.

All this messing about with files manually is way too time consuming, often confusing and the amount of work needed to get this Remako mod working is stupid, especially for gamers that are not computer minded. The Instruction guide is DESPERATELY in need of a step-by-step video guide from start to finish in getting Remako working on PC STEAM version (cos lets face it, thats how 99% of people are playing it), having a few videos by different people is NOT helpful at all.. and they are outdated, so a new one needs to be made.
July 2, 2019 at 3:18 PM

CaptRobau said…
I'll try to streamline the install with an installer for the next update. No promises though. FF7 PC is notoriously hard to get setup for modding.
July 13, 2019 at 9:46 AM

CaptRobau said…
You have a wrong EXE chosen in the 7th Heaven settings. Do you have Reunion/Beacause mod installed? That would mean that you need to set it to ff7_bc.exe.
July 13, 2019 at 9:48 AM

CaptRobau said…
Sorry, it's the only way. FF7 for PC is a b*tch to setup for modding. Bright side, your saves and achievements will be there when you revert back to the original Steam install. They aren't deleted by installing this mod. Just disabled while it's installed.
July 13, 2019 at 9:51 AM

Unknown said…
Everyting else about the the mod works except the FMVs for me. I compared the ones downloaded for the modpack to their originals both in game and from BSplayer but there doesn't seem to be any difference. Is there a way to fix this issue?

Unknown said…
Hello, it's only few days i have started to deal with those mods and i have few questions :
1- There are already 2 ITALIAN translation (that won't work if modding the game), why those cannot be integrated with the 7h Heaven mod list (of course it's an example, any language could be integrated)?
2- Is the REMAKO mod IRO file replacing any of the 7h Heaven downloadable mods (some are about graphic improvement) ??
August 18, 2019 at 12:33 PM

Zantex said…
If you want to play it in italian with mods, then take a look here.

Streetguru said…
Had some strange issues, windows 10 latest probably, 1950X + RX 5700 19.8.2
I got it to work once after using the code 5 enable 640x480 compatibility, but then 7th heaven like broke my graphics drivers/display, made it run at 4k 64hz. and while the game looked sharp and everything, it may have been dropping frames at 64hz, or it was just running a really low/unstable frame rate.

It also never wanted to work again, kept giving me an openGL error, probably due to breaking the drivers.

Reinstalled since and it's running the base game fine again, may try installing windows 7 if that fixes compatibility issues.
September 27, 2019 at 6:22 AM

r3dstar said…
Check out my youtube video so you can install this. Way better instructions than what CaptRobau has... this works fine if instructions below are followed.
https://youtu.be/Rnp2sDVVhUU
December 9, 2019 at 1:23 AM

Lucard said…
I know you said that you people asked you to make an hd mod for other ff, and you said that you cant do that because you dont have the same feeling, but maybe this is different for you, is there a posibility that you could make the same for Crisis Core: Final Fantasy VII, a lot of people want it, there is an ui hd project but is not the same and they dont use AI Gigapixel so the ui is not the same, the game have some in game scenes with the game engine, some of them are made without the game engine, and some of them are made with some pre rendered scenes from the ingame engine, they made this in some parts because the psp loading time, but you can access to the scenes with the game engine with the debug menu (some people think that they leave this menu in case they make a remaster but they wont because ff VII remake), so anyone could record them and inject them, there is an actual video in youtube that litterally used Ai gigapixel for the CG scenes, so its only contact the creator and use them, so the work would be in the game textures and record the ingame scenes in the debug menu in HD (No body made this before I think...), I think this would be easier than the ps1 game because is less work.
December 24, 2019 at 12:37 AM

Followed the install guide to the dot. I got an error when launching from 7th heaven, see error on this link : http://prntscr.com/s0av49

Dan said…
@Dodoria: right click on the ff7.exe and on compatibility tab:

Unknown said…
The AI Upscale program you used, is it something you pay for or is it free (so that someone else might consider continuing this project)?
March 22, 2021 at 11:16 AM